Tracey Johnson is our manager, leader and trainer. A lifelong horsewoman and breeder, Tracey has been teaching dressage and jumping to all levels of students for 31 years. Riders of all disciplines will benefit from Tracey’s ability to break down complex concepts to make them understandable. All horse and rider combinations will enjoy improving their horsemanship skills with her. All ages and levels of skill and ambition are welcome, from young children to adults. Whether you simply want to safely enjoy horses in the arena or on the trail, or wish to show, Tracey will build a learning program so you can achieve your goals. 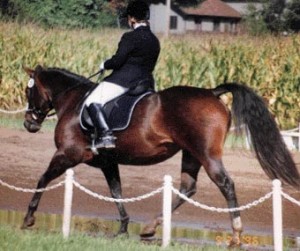 Horses have the largest eyes of any land animal.

Horses can sleep both lying down and standing up.

Horses can run shortly after birth.

Domestic horses have a lifespan of around 25 years.

A 19th century horse named ‘Old Billy’ is said to have lived 62 years.

Horses have around 205 bones in their skeleton.

Horses have been domesticated for over 5000 years.

Because horse’s eyes are on the side of their head they are capable of seeing nearly 360 degrees at one time.

The fastest recorded sprinting speed of a horse was 88 kph (55 mph).

Estimates suggest that there are around 60 million horses in the world.

Scientists believe that horses have evolved over the past 50 million years from much smaller creatures.